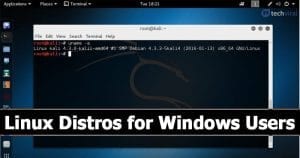 Sometimes, we all want to give an open-source operating system, of course, Linux a try. However, for Windows users, operating Linux could be an overwhelming experience. Actually, Linux is for technical users, and it has lots of complicated settings.

So, if you are a Windows user and want to try any Linux distribution, then you have landed on the right web page. In this article, we are going to share with you the list of best Linux distro for Windows 10 users. These Linux distros will give you the best possible Windows desktop experience.

RoboLinux is a Linux distro, but you will hardly find any Linux user talking about it. This is because RoboLinux tries to be like Windows. Itâs the best Linux distro that one can use instead of Windows. Unlike all other Linux distros that rely on Wine to run Windows programs, Robolinux has its own virtual machine StealthVM to run Windows app on Linux.

Linux Mint is also one of the best Linux distros in general. The great thing about Linux Mint is that it focuses more on providing a classic desktop experience like Windows 10. Compared to other Linux distros, Linux Mint is pretty easy to use, and itâs filled up with useful tools to carry out the everyday task.

We all know someone who tried to switch to Linux but was unsuccessful. This is because of the fact that Linux is pretty difficult to use, especially if you are switching from Windows. The goal of ChaletOS is to let anyone use Linux. This system is not too different from Xubuntu, on which it is based, but ChaletOS has a style that everyone knows well, appealing simplicity, and impressive speed.

Zorin OS, often marketed as the best alternative to Windows, is a minimalistic Linux distribution that offers lots of pre-built tools to carry out everyday tasks. Zorin is pretty good for beginners who donât want to spend time learning how Linux works.

This is one of the most lightweight and user-friendly Linux distros you can use. The interface of Kubuntu is highly customizable, doesnât have most of the disadvantages with Ubuntu. Even Microsoft has just ported the Powershell in Kubuntu, making the operating system more friendly to Windows users.

OpenSUSE Leap is one of the best Linux distros that every Windows user would love to have on Android. However, OpenSUSE Lean is only meant for pro-Windows users who knows a lot about technical stuff like networking. The Linux distro offers lots of enterprise-grade features while retaining the Microsoft Windows experience.

Solus is one of the fastest-growing Linux distros which had gained massive fame in a short period. The great thing about Solus is that it retains the minimalist look. Solusâs interface is not exactly the same as Windows, but it will give you the exact feel. The Linux distro also brings a wide range of tools for watching movies, playing games, managing photos, surfing the internet, etc.

Q4OS is another best Linux distro that Windows users can use today. The great thing about Q4OS is that it looks exactly like Windows XP. Not just that, but Q4OS also shares few features with Windows XP as well. Another best thing is that just like Windows XP, Q4OS can run on a low-end computer.

If data security is the utmost priority, then Qubes 3.2 might be the best pick for Windows users. Itâs one of the best Linux distribution available for security-conscious users, and it offers lots of features. Apart from that, Qubes 3.2 is extremely lightweight and can run on a low-end system.

So above are the Best Linux Distros for Windows Users. I hope this article helped you! Make sure to share it with your friends also. If you know any other Linux distro like these, let us know in the comment box below.