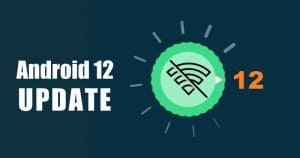 We can expect Google to release the next Android update in February 2021. Google is bringing the Android 12 Operating System and the developer preview will be live next month. However, we donât know many details about the major OS update, but few features are out.

Few Android 12 Features Spotted, Preview will be Live in February

Some of the new Android features are seen in Android Open Source Project (AOSP), and the latest feature is âRestricted Networking Modeâ. And the other one is the âNearby Shareâ feature that allows you to easily share the QR code with others who are using the Nearby Share.

This means, whenever the user turns ON this mode via Settings, only that apps which have allowed to âuse restricted networksâ will be allowed to use the network.

As this permission can only be given to privileged system apps or/and the apps signed by the OEM. So, for all the apps that are installed by the user the network access will be blocked for those apps. This means that you will receive push notifications from the apps using a Firebase Cloud Messaging (FCM) as the notifications are routed via the privileged Google Play Services app.

We donât know much about the feature coming in Android 12. Google will let you make your own blocklist or allowlist of the apps, there is no details on it.

Whenever someone asks a wifi password, we donât like to repeatedly tell them or enter it manually again and again. However, Android 10 OS allows you to share your Wi-Fi password in the form of a QR Code. However, Google is making it more simple as it is bringing the Nearby Share feature in Android 12.

Google is working on this feature that will allow you to easily share the QR code with others by using this feature. The user just needs to take a screenshot of the âShare Wi-Fiâ page and send it via Nearby Share. Make sure the other user is also using the Nearby Share.

So, these are some of the updates of the upcoming Android 12 OS which is going live next month.