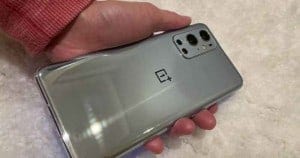 This latest leak of the OnePlus 9 Pro comes from a YouTube named Dave2D. He has posted a picture on Twitter that shows the device prototype with Hasselblad branding. However, it is not confirmed that these brand cameras will be there on the OnePlus 9 Pro. As, it is a Swedish manufacturer of medium cameras and they usually donât enter into smartphone cameras.

An early look at the OnePlus 9 Pro. I think.https://t.co/27yBQed9Ox pic.twitter.com/alUqh0LHyy

We can see a detailed look at the Pro model in the series of hands-on-images. The overall design of the device is the same as the OnePlus 9, which was also leaked in December.

As per the leaks, it claims, the OnePlus 9 Pro will have four camera modules and the brand of the camera might be Hasselblad. If this is true, then it will be the first time when Swedish camera maker is doing a partnership with the smartphone company OnPlus.

There might be a wide, ultrawide, macro, and depth sensor module layout. Even there are images of the camera UI that shows the different modes like Nightscape, Pro mode, and Tilt-Shift. The UI shows that there is a 0.6 mode via ultrawide module and up to 3.3x.

You can check out the full video here:

A leakster also confirms that the device will have a curved screen with QHD+ resolution and a 120Hz refresh rate. OnePlus 9 Pro will run on Snapdragon 888 and will have 12GB RAM. The device will be powered by a 4,500 mAh battery with wireless charging.